Let's take the same example as we did last time, i.e. let's say we have a xivo-aastra plugin installed.

So we plug a brand new Aastra 6731i on our network. The phone then does the following HTTP request:

The "device info extraction" step is then able to extract the following information:

This information is then passed to a "device retriever" object. Here's a pseudo code version of what it looks like:

Let's see in more details what happens in this "device retriever" object: 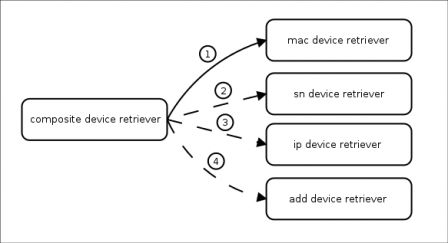 On the next requests of our Aastra, the "mac device retriever" will search for a device with the given MAC and will then return the device object that was added previously.

From what we just learned, we can see that it's at this step that devices are automatically added to provd. That said, the automatic plugin association and automatic config association (taken from a "template" config) is not done at this step but later on, which is something we'll see in more details in my next blog post.

If provd had to support only Aastra phones, only the "mac device retriever" and the "add device retriever" would be needed (and some part of provd would be a whole lot simpler also). That said, the reality is more complex. Some phones are only doing TFTP requests, which means no User-Agent header and little information to extract for some requests, sometimes only the IP address. This is where the "ip device retriever" comes in handy. It's usually able to find the right device by only using the IP address. This is possible because provd always try to maintain the most up to date info about IP address used by devices.

That said, for some devices, there is some scenarios where the system just isn't powerful enough:

The system still works in these cases. The only problem is that you get junk devices in provd device's database, and these can only be removed manually. They are not causing any real harm except then adding some confusion as to why theses devices are in the database.

There is a way to get by this problem, and it's called "dhcp integration". Yes. Just believe me.

So that's all folks. Next time, if your brain still hasn't suffered from an epileptic seizure, get ready because we'll be talking about the "device updating" step.