The preprocess_subroutine allows you to enhance Wazo features through the Asterisk dialplan. Features that can be enhanced are :

There are three possible categories :

Subroutines are called at the latest possible moment in the dialplan, so that the maximum of variables have already been set: this way, the variables can be read and modified at will before they are used.

Here is an example of the dialplan execution flow when an external incoming call to a user being forwarded to another external number (like a forward to a mobile phone): 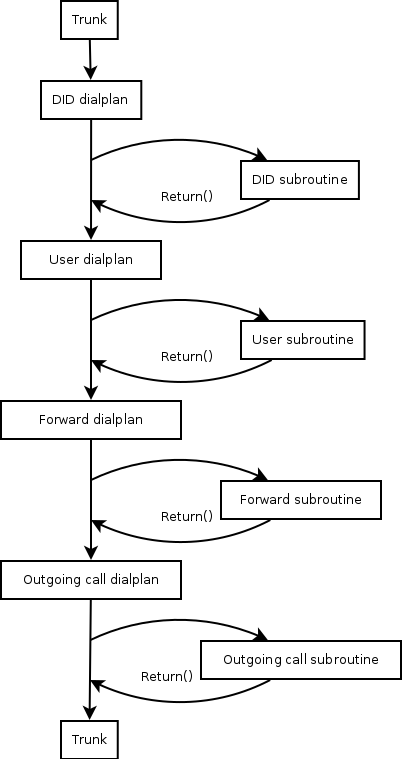 You can write the subroutine:

Note: Since all configuration files will be merged together in the end, it does not matter in which file you write your subroutine. The different files are only here to find your way back more quickly than one big configuration file. So don't be afraid to create new files!

Subroutines should always end with a Return(). You may replace Return() by a Goto() if you want to completely bypass the Wazo dialplan, but this is not recommended.

To plug your subroutine into the Wazo dialplan, you must add myexample in the preprocess_subroutine subroutine field of your object.

There is predefined subroutine for this feature, you can find the name and the activation in the /etc/xivo/asterisk/xivo_globals.conf. The variables are:

So if you want to add a subroutine for all of your Wazo users you can do this:

You can also use a global subroutine for call forward.

Some examples of pre-dial handlers include:

To add this pre-dial handler to an outgoing call, create a subroutine:

Finally, you can set the subroutine of your outgoing call to add-sip-header-pre-dial.

Some of the Wazo variables can be used and modified in subroutines (non exhaustive list):