You have two options to get your phone to be provisioned:

You may want to manually configure the phones if you are only trying Wazo or if your network configuration does not allow the phones to access the Wazo DHCP server.

You may want to set up a DHCP server if you have a significant number of phones to connect, as no manual intervention will be required on each phone.

Wazo includes a DHCP server that facilitate the auto-provisioning of telephony devices. It is not activated by default.

There are a few things to know about the peculiarities of the included DHCP server:

The DHCP server is configured via PUT /dhcp

Warning: If you uninstall a plugin that is used by some of your devices, they will be left in an unconfigured state and won't be associated with another plugin automatically.

It's possible that there will be more than one plugin compatible with a given device. In these cases, the difference between the two plugins is usually just the firmware version the plugin targets. If you are unsure about which version you should install, you should look for more information on the vendor's website.

It's good practice to only install the plugins you need and no more.

By default, the list of plugins available for installation are the stable plugins for the officially supported devices.

The difference between the stable and testing repositories is that the latter might contain plugins that are not working properly or are still in development.

The archive repository contains plugins that were once in the stable repository.

After setting a new URL, you must refresh the list of installable plugins with /provd/pg_mgr/install/update

How to manually tell the phones to get their configuration

If you have set up a DHCP server on Wazo and the phones can access it, you can skip this section.

The appropriate provisioning plugins must be installed for your device.

In the web interface of your phone, go to Advanced settings --> Configuration server, and enter the following settings: 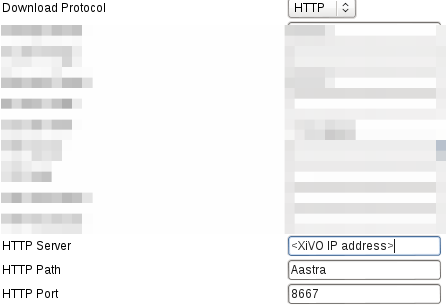 Then save and reboot the phone.

First, you need to run the following command on the Wazo server:

On the web interface of your phone, go to Setup --> Advanced --> Update and enter the following settings:

On the web interface of your phone, go to Settings --> Auto Provision, and enter the following settings:

Save the changes by clicking on the Confirm button and then click on the Autoprovision Now button.

Once you have installed the right provd plugins for your devices and correctly set up your DHCP server, you can then connect your devices to your network.

But first, GET /devices. You will then see that no devices are currently known by your Wazo

You can then power on your devices on your LAN. For example, after you power on an Aastra 6731i and give it the time to boot and maybe upgrade its firmware, you should then see the phone has its first line configured as 'autoprov', and if you GET /devices, you should see that your Wazo now knows about your 6731i with status: not_configured

You can then dial from your Aastra 6731i the provisioning code associated with a line of one of your user. You will hear a prompt thanking you and your device should then reboot in the next few seconds. Once the device has rebooted, it will then be properly configured for your user to use it. And also, if you GET /devices, you'll see the device with with status: configured

To remove a phone from Wazo or enable a device to be used for another user:

The phone will restart and display autoprov. Ready to be used for another user.

The phone restarts and displays autoprov. Ready to be used for another user.